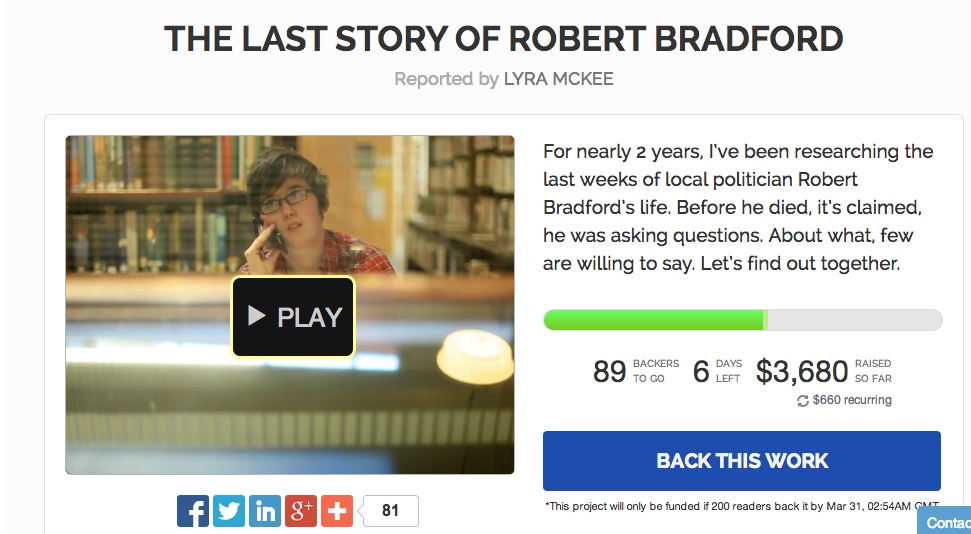 At INN, our core mission is to create sustainable, independent nonprofit news organizations -- so we're fascinated by the many different approaches journalists are using to fund their work.

Lyra McKee of The Muckraker is writing a book about the 33 year old murder of Robert Bradford, a politician from Northern Ireland.  In exchange for a donation, backers get access to the book as it's being written.  We asked Lyra what she's learned about crowdfunding an investigative journalism project.
"If I could offer any advice on doing a crowdfunding campaign, it's - don't set a target you want, set the target you think you can get," says McKee.  "It's not the be all and end all: you've got to look at it as part of a longer process of nurturing readers and bringing them into the fold. So if you even get just 100 readers backing you, that's great: provide them with something so awesome that all they go out and convince one friend to help you in some way. Then you'll have your '1,000 True Fans', as Kevin Kelly calls it."

McKee points out that we don't always know who our core supporters will be. "People will completely surprise you," she says.  "It looks like I'm only going to get 100 readers all in all (out of 200) yet the 95 who have donated so far have generated nearly $3500 in donations, with $530 of that recurring monthly in the form of subscriptions. Often, it's the tiny audiences who contribute the most because they really, really love what you're doing or they're care about it. Always assume you're operating on a long tail and work really hard to nurture that audience: they are your evangelists. Don't sit in the ivory tower: go out and talk to them. I have coffee with my readers all the time. If I know them well enough, I give them sneak peaks of what I'm working on before it goes out. They're collaborators, as far as I'm concerned."

Brett Orzechowski of INN member news organization CT Mirror recently completed a crowdfunding campaign for a project on homeless children.  He offers these tips: "We just finished one up for a homeless children project. We offered incentives but what also helped is that we had a funder who was willing to match what was raised before the launch of the campaign. This helped in two ways: 1) Name association - reputable, people recognized the stamp of approval; 2) Tapping into another network of like mind for the mission-driven reporting. The concept was distributed through their network. Strength is in numbers.

Orzechowski points out a key fact: even campaigns that fall short of the originally stated goal can still jumpstart a project: "We fell short of our goal, but reached what we needed to get the project off the ground."

Lyra's campaign is ongoing, and she needs to get 200 supporters before March 31. Even a small donation will help, so if you want to kick in $5 or more, click here.