"Nerd knife."  That's the nickname for the spiky, shiny statuette given to each winner of the Online News Association's annual awards.  Here's ProPublica's Scott Kline posing with his at the award banquet:

The typically modest Klein, standing at the podium to accept his organization's award for their 2012 presidential election coverage, said, "I'm just the editor -- I just buy the pizzas."  Klein also presented at the conference.  Along with Michelle Minkoff of the AP, he presented a session focusing on an easier way to download data for stories from the web.

The Center for Investigative Reporting snagged the Topical Reporting/Medium award for their series on veterans of the Iraq & Afghanistan wars, "Returning Home to Battle."Jake Batsell of the Texas Tribune accepted the General Excellence award for his organization: 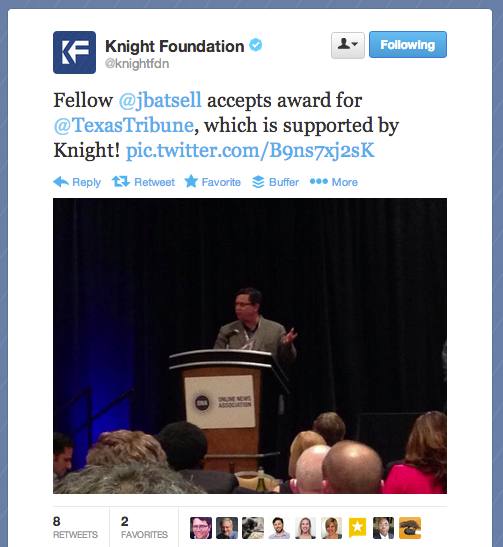 Mother Jones won the award for Explanatory Reporting, Medium for its feature "America Under The Gun: Gun Laws and the Rise of Mass Shootings." INN member NPR also won an award for its 2012 election coverage. Congratulations to all the finalists and winners!